Many microfluidic applications require measurements to be conducted, either continuously or at the end of a run. For example, collected data can serve to monitor process conditions or to indicate the result of a test. In order to accomplish this, the microfluidic device can be coupled to standard laboratory instruments. However, this might stand in the way of miniaturisation, where one of the goals is to develop systems that are self-contained and portable. In this instance, the application may benefit from integrating existing and new sensor technology within the microfluidic system. Over the years and in close collaboration with technology partners and end-users, we have developed numerous products that are equipped with sensing functionality.

Our microfabricated chips can be made to include thin film metal layers. For example, those composed of platinum or gold. The electrical resistance of thin film resistors is temperature dependent, which then provides a simple way of sensing that temperature. Furthermore, thin film electrodes can be used to measure electrical impedance of electrolytes inside a device. For instance, some of our capillary electrophoresis chip are equipped with electrodes to measure variations in the conductivity at the end of the separation channel to detect and quantify the separated analyte zones (see our T35100C4D and T80100C4D chips).

We can also use molecular probes as a transducer for measuring chemical species inside microfluidic devices. One application is the use of phosphorescent materials to measure dissolved oxygen, an application particularly relevant in cell culture systems. Patches containing the probe material are fabricated on the inside surface of devices. An optical fiber mounted in the chip holder directs the excitation light to the patches and collects the phosphorescent signal for quantification.

Detection modules consisting of microfluidic flow cells integrated with, e.g. optical sensors, can be used as a sensitive readout of biological assays in point-of-care (POC) tests. In a collaborative project between Micronit, Janssen Diagnostics and NXP Semiconductors we have developed a microfluidic detection module consisting of a microfluidic flow cell with an integrated Complementary Metal–Oxide–Semiconductor (CMOS)-based single photon counting optical sensor. The performance of the detection module was demonstrated in three assays: a peptide, a protein and an antibody detection assay. The antibody detection assay with readout in the detection module proved to be 7-fold more sensitive than the traditional colorimetric plate-based ELISA. The protein and peptide assay showed a lower limit of detection (LLOD) of 200 fM and 460 fM respectively. Results demonstrate that the sensitivity of the immunoassays is comparable with lab-based immunoassays and at least equal or better than current mainstream POC devices. This sensitive readout holds the potential to develop POC tests, which are able to detect low concentrations of biomarkers. Due to the integrated sensor based readout, the detection module is suitable for implementation in stand-alone POC tests, for use in mobile or rural settings. This will broaden the diagnostic capabilities at the clinician’s office and at the patient’s home, where currently only the less sensitive lateral flow and dip stick POC tests are implemented.

Would you like to read more? Then download the full paper "Integration of an optical CMOS sensor with a microfluidic channel allows a sensitive readout for biological assays in point-of-care tests". 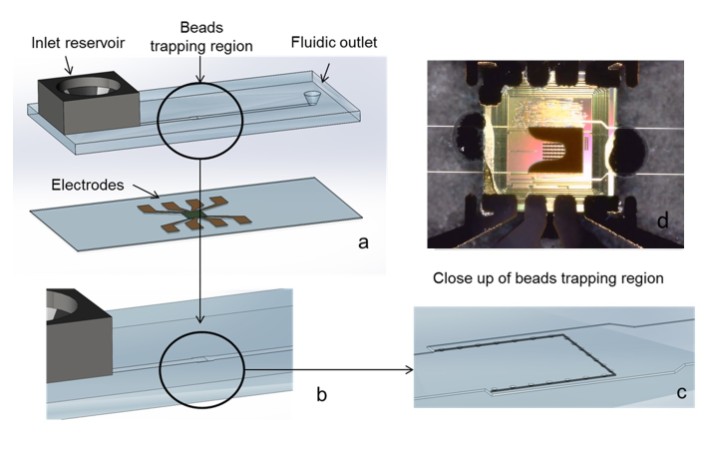 (a) Schematic representation of the high aspect ratio flow cell assembly with inlet reservoir for beads loading, fluidic outlet and beads trapping region in the top substrate and electrodes patterned on the bottom substrate.

(b and c) Close up of the beads trapping region, where pillars fabricated along the ridge with the function keeping the narrow slit of 1.5 mm open are also shown.

(d) Photograph of the beads trapping region during loading. Beads with a diameter of 2.8 mm are trapped at the ridge where only a 1.5 mm gap allows fluid to flow through, while beads accumulate in a densely packed configuration 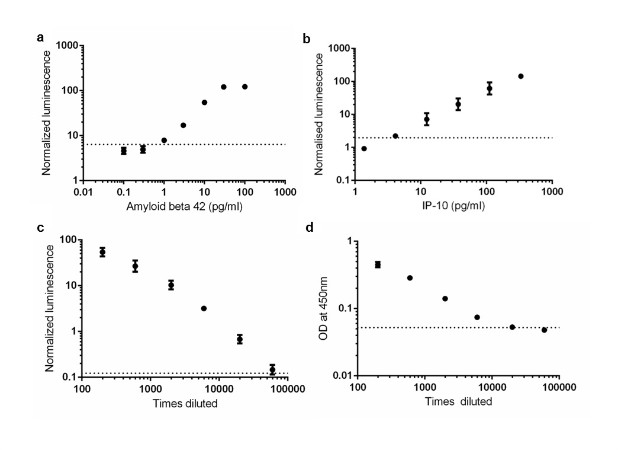 Results demonstrator assays (a) Detection of amyloid beta 42 by a chemiluminescent bead ELISA with readout in the detection module;

(b) Detection of IP-10 by a chemiluminescent bead ELISA with readout in the detection module;

(d) by a colorimetric plate ELISA. The error bars show the SD of the triplicate measurements and the dotted line shows the threshold value, defined by “The average of the blank + 3 x SD” (n=3).