Sub-micron technology with an enormous impact

We all are familiar with x-rays. Whether it is being confronted with a revealing picture of the state of our teeth at the dentist or having the contents of our suitcase checked passing the airport security - x-rays are literally part of daily life.

Now we can take this a step further. By scaling up the power of the x-ray device, researchers can even uncover secrets at the scale of individual atoms. This is done at the Linac Coherent Light Source (LCLS) of SLAC National Accelerator Laboratory (Stanford University). This laser facility produces x-ray laser beams that are among the brightest on the planet. The x-rays are applied in short pulses that are fired 120 times per second. The LCLS basically takes snapshots of atoms and molecules at work, thus revealing fundamental information about the processes going on inside these materials. Researchers at SLAC are specialised in single particle imaging. By combining several digitalised images of identical particles, a three-dimensional reconstruction of the particle can be built up. This field of research opens an infinite potential for capturing biological, chemical and physical dynamics.

At SLAC, the main accelerator is 3,2 kilometres long – the longest linear accelerator in the world. The output of this gigantic facility is fired at samples at molecular size level. So, during your next walk in the woods, imagine being a hunter having to shoot a mosquito flying between the tree branches. Note: without damaging any of the trees. Think about how small a bullet you would need. And how precisely aimed your firearm should be. And, for what it’s worth, how well you’d want to know the flight plan of this mosquito. Considering the magnitudes in the LCLS are still far wider apart, this can shed some light on how precisely bundled (and therefore powerful) the produced laserbeams must be, and how stable the targets.

Daniel DePonte, head of the Sample Environment Department (SED) at LCLS, wishes to enlarge the accessibility of the x-ray laser to the global scientific community and onsite staff. He points out that, in order not to waste any of this laser facility’s productivity time, well-prepared samples are mandatory. (Exit mosquitos with unpredictable travel schemes, basically.) Unreliable samples may lead to disappointing, or worse, no results. Each laser pulse can damage or destroy its target, so there is only one chance to do it right. Therefore, to maximise the chances of success, the samples researchers at LCLS use, must meet certain standards.

As if above mentioned isn’t difficult enough, there is the challenge of having to deal with samples in a liquid state. The majority of the chemistry in life on Earth occurs in a liquid environment, so to capture these processes, taking measurements in aquatic conditions is inevitable. Unfortunately, x-rays travel bad through liquids because they are strongly absorbed by water. Thus, researchers had to find a way around this. They came up with ultrathin, freeflowing liquid sheets to use as targets. These freeflowing liquid sheets are two orders of magnitude thinner than anything previously known and can be used for IR, x-ray and even electron spectroscopy.

How are these tiny sheets produced? That’s where Micronit makes an entrance. The device used for generating the liquid sheets is a gas-dynamic nozzle that consists of three microfluidic channels in a borosilicate chip. On one side, liquid and gas are separately introduced into the chip, they are merged in the middle and on the other side oval-shaped, ultrathin sheets come out. The nozzle was designed by Daniel DePonte and produced by Micronit. The liquid sheets were recently used at the FLASH facility in Hamburg and the SXR beamline at the LCLS at Stanford. Curious to find out more about the development of these sub-micron sheets? You can read about it in the article ‘Generation and characterization of ultrathin freeflowing liquid sheets’ recently published in Nature communications. Naturally, Micronit is delighted to be mentioned in this article as manufacturer of the nozzle used in producing the sheets. 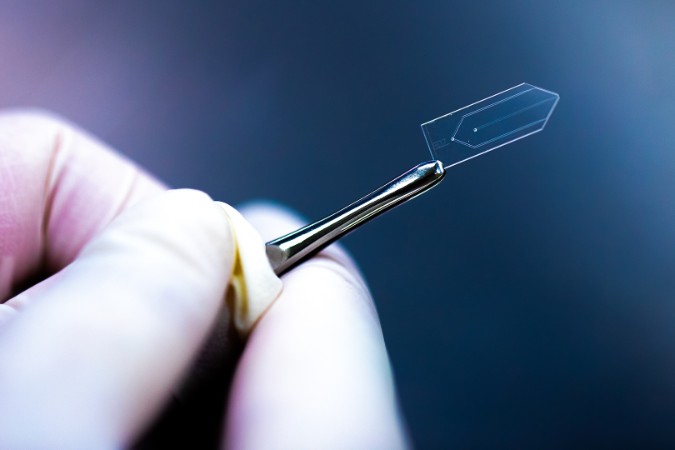 But the best part of this story lies in the fact that this recently developed nozzle, the use of which is now the new standard, is unrestrictedly accessible. It can simply be purchased at Micronit’s webstore. The design was generously shared by the developer. This way, other researchers can benefit from this development by being able to focus more on their research instead of on side issues. This cooperation of researchers, developers and manufacturers is beneficial to the complete field of research and gives it the chance to grow and mature.

As a result, we are curious after new projects that might lead to cooperation. Do you want your research to become the new standard as well? Share your design and improve the chance of making an impact in your field of research.