Etching is a technique to create patterns in glass and silicon substrates by chemically or physically removing selected parts from the surface of the wafer. The removal of material can be limited to a specific layer, but can also consist of a larger portion of material. Etching can be performed using wet or dry techniques, depending on the substrate material and the desired geometry of the etched structure. Powder blasting is another etching method for silicon and glass patterning.

Deep Reactive Ion Etching (DRIE or plasma etching) is a dry etching technique to create high density and high aspect ratio structures in glass and silicon substrates. In (D)RIE etching, sections of the substrate are removed as a result of a bombardment of the material with ions. Both etching with steep sidewalls (anisotropic etching) as well as with rounded sidewalls (isotropic etching) is possible, with depths varying between 1 µm cavities and complete wafer-through holes.

These sequences of etching, passivating and opening up are repeated until the chosen etching-depth has been reached or until a complete through-hole has been created.

For DRIE of silicon, Micronit can offer the following:

Micronit is one of the few companies able to use the DRIE method in glass substrates. With this unique technique, Micronit is able to create high aspect ratio structures in glass substrates. Not only the pure quartz glass can be dry-etched using this technology, but also less costly glass such as BF33® or D263®. Glass wafers of Borofloat (BF33®) can be anodically bonded to silicon. This way, complex and highly integrated technologies for multidisciplinary applications can be fabricated.

For DRIE of glass, Micronit can offer the following: 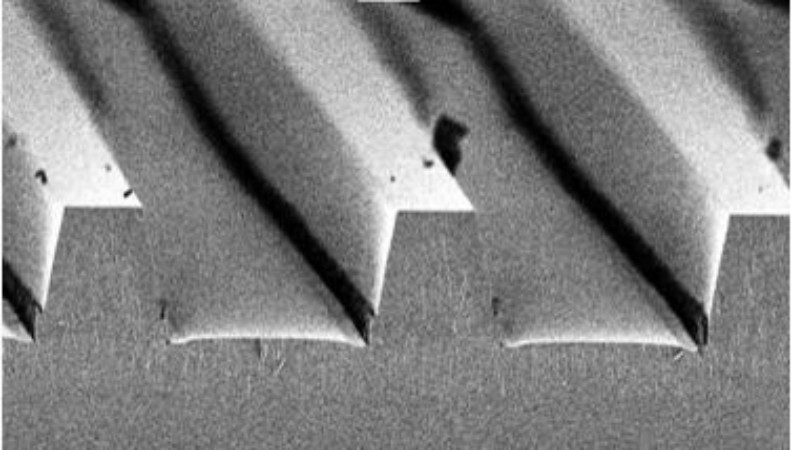 Micronit applies wet chemical etching techniques to create structures in glass and silicon. For glass, hydrofluoric acid (HF) is used as an etchant, which produces an anisotropic etching profile. In addition to etching glass and silicon, Micronit offers the etching of various thin film metals such as Au, Cr, Cu, Ni, Ti and the etching of non-conductors such as oxide and nitride.

As with dry etching, the pattern is defined using photolithography. The structures that are created can be positioned with an accuracy within one µm. Masks are used to define the shape of the structure.

In wet etching of glass, hydrofluoric acid (HF) is the liquid etching agent. This technique is isotropic: the glass dissolves in all directions equally fast. As a rule, in isotropic etching, a channel is always twice as wide as it is deep. Besides, the corners of the channel are rounded. The surface of the etched structures is, corresponding to the type of glass used, very smooth.

Anisotropic etching of silicon is done using alkali hydroxides such as KOH, NaOH, or amine-containing solutions such as TMAH. KOH is the most popular, having been in industrial use for decades. Because silicon is a monocrystalline material, etching of the crystal planes always yields the same etching angle. By making use of the varying etch rates of the different crystal planes, the desired geometry of the structure can be achieved. Already during the production of the wafer it is determined which angle on the crystal lattice is required to obtain the needed structure. Depending on the temperature and concentration, various etch rates and surface roughnesses can be achieved. Masking is generally done using a nitride layer, which is typically patterned using photolithography followed by RIE.

Besides dry etching and wet etching, powder blasting is another method which can be used to create through-holes, channels and cavities in silicon and glass. In powder blasting, a high velocity particle jet is directed on a substrate for mechanical material removal. The material is removed only there, where the glass or silicon is not protected by a (lithographically patterned) resist layer. After the powder blasting process, the substrate is thoroughly cleaned and can then be further processed or bonded to another glass or silicon substrate.

Powder blasting has the advantage that it can quickly remove large portions of material. Disadvantages are that it produces rougher surfaces and that minimum feature sizes are larger than in other etching techniques. Both 'downsides' are due to the physical size of the particles used in the powder blasting process. The layout of the structure can be chosen freely: wells or holes can be round, rectangular, or any other shape. The sidewalls of the powder blasted structures will not be completely vertical but sloped at an angle of about 75°.

For powder blasting, take the following parameters into consideration:

Why work with us?

At Micronit, we specialise in accompanying our customers all the way from idea to production. Are you looking for a development and manufacturing partner? Take a look at our route to success!

Is your project in need of an etching solution? Please contact our experts!

But we can do more

Materials
The range of materials we work with